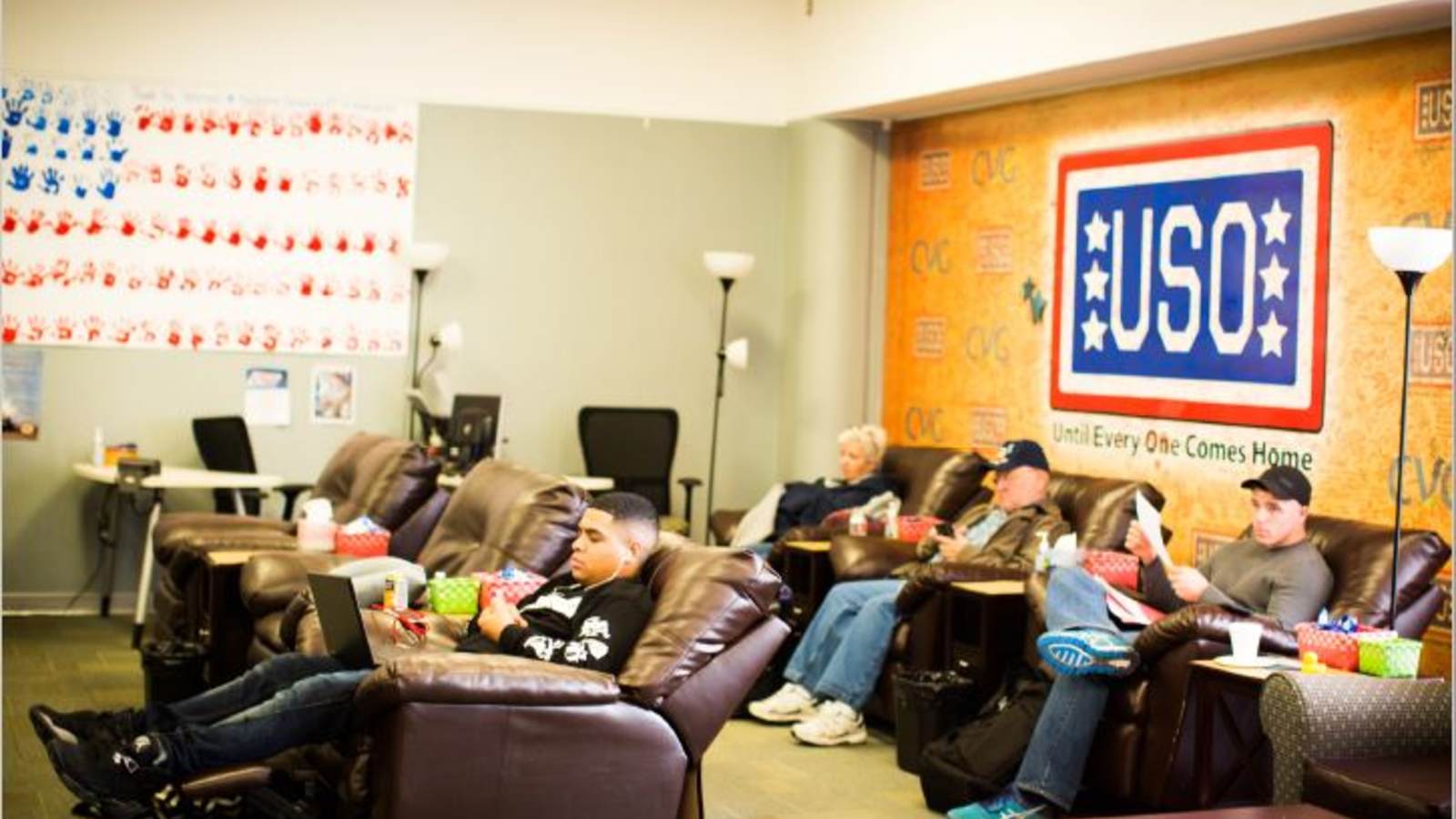 Each year, as the USO lounges are frequented more often, their needs grow and grow. Volunteers are needed to ensure the lounge is open during the 12-hour period each day, and donations of money, food, drink and other consumables are welcome. 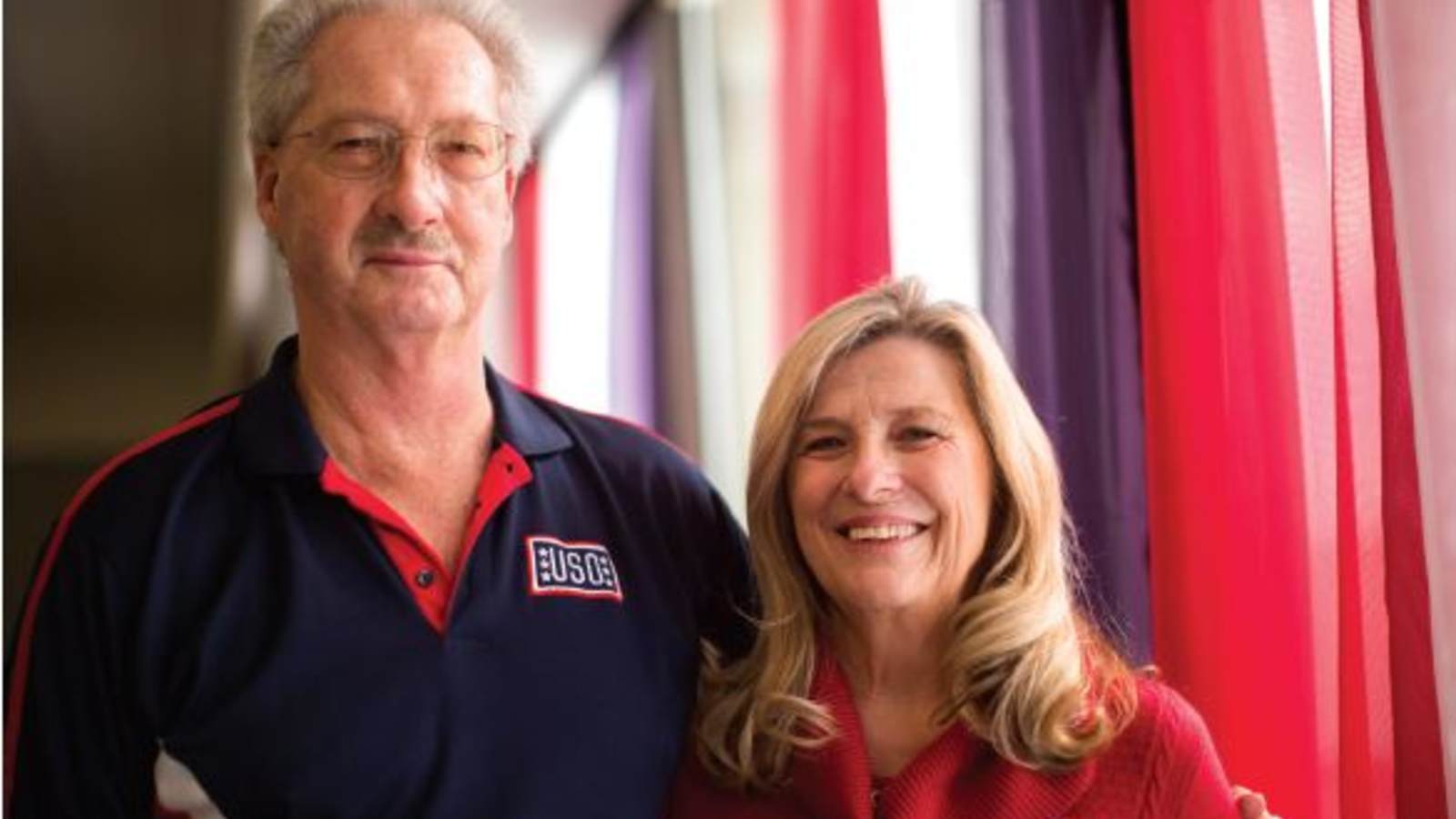 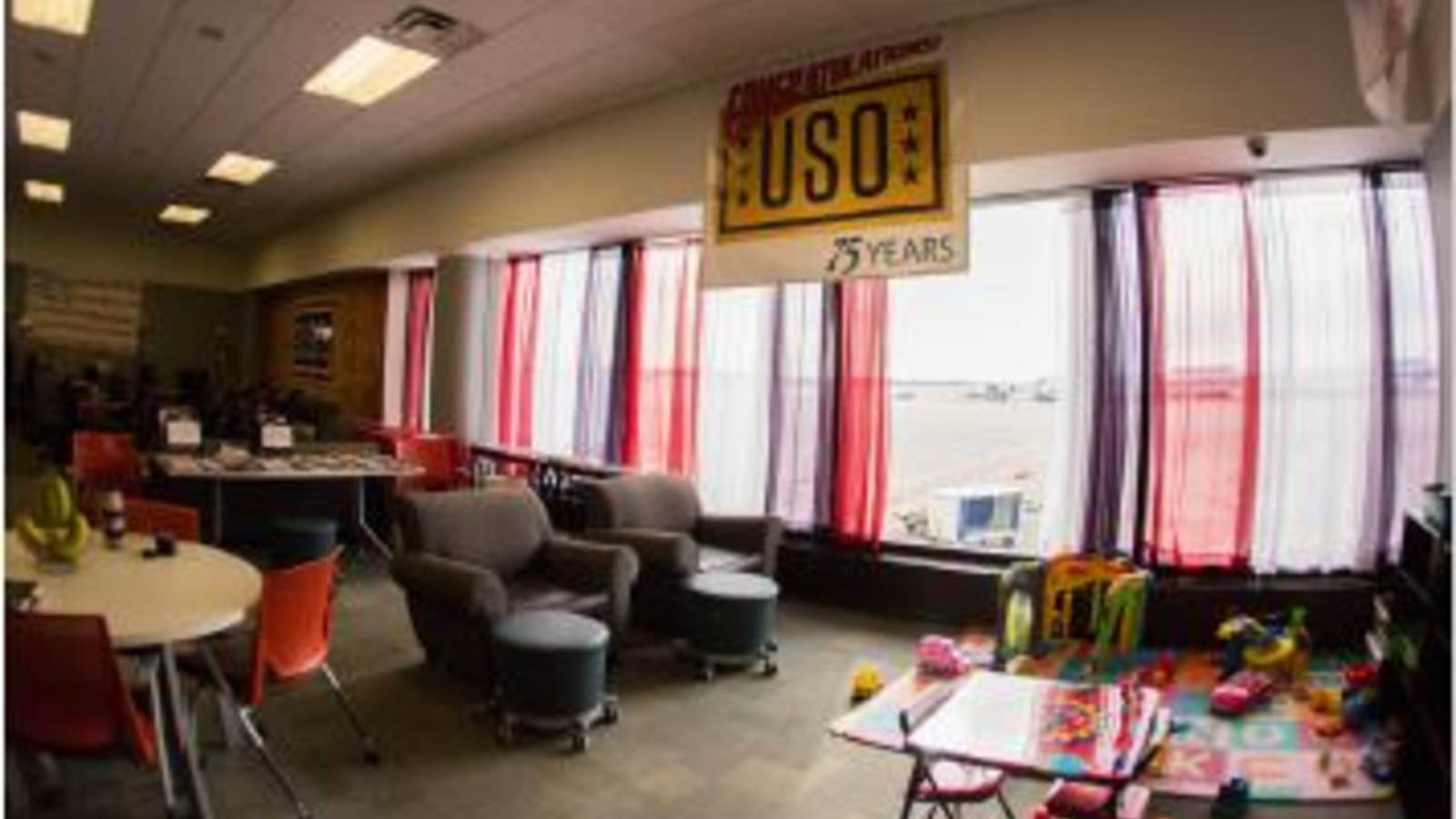 The USO lounge at CVG also provides a play area for children. 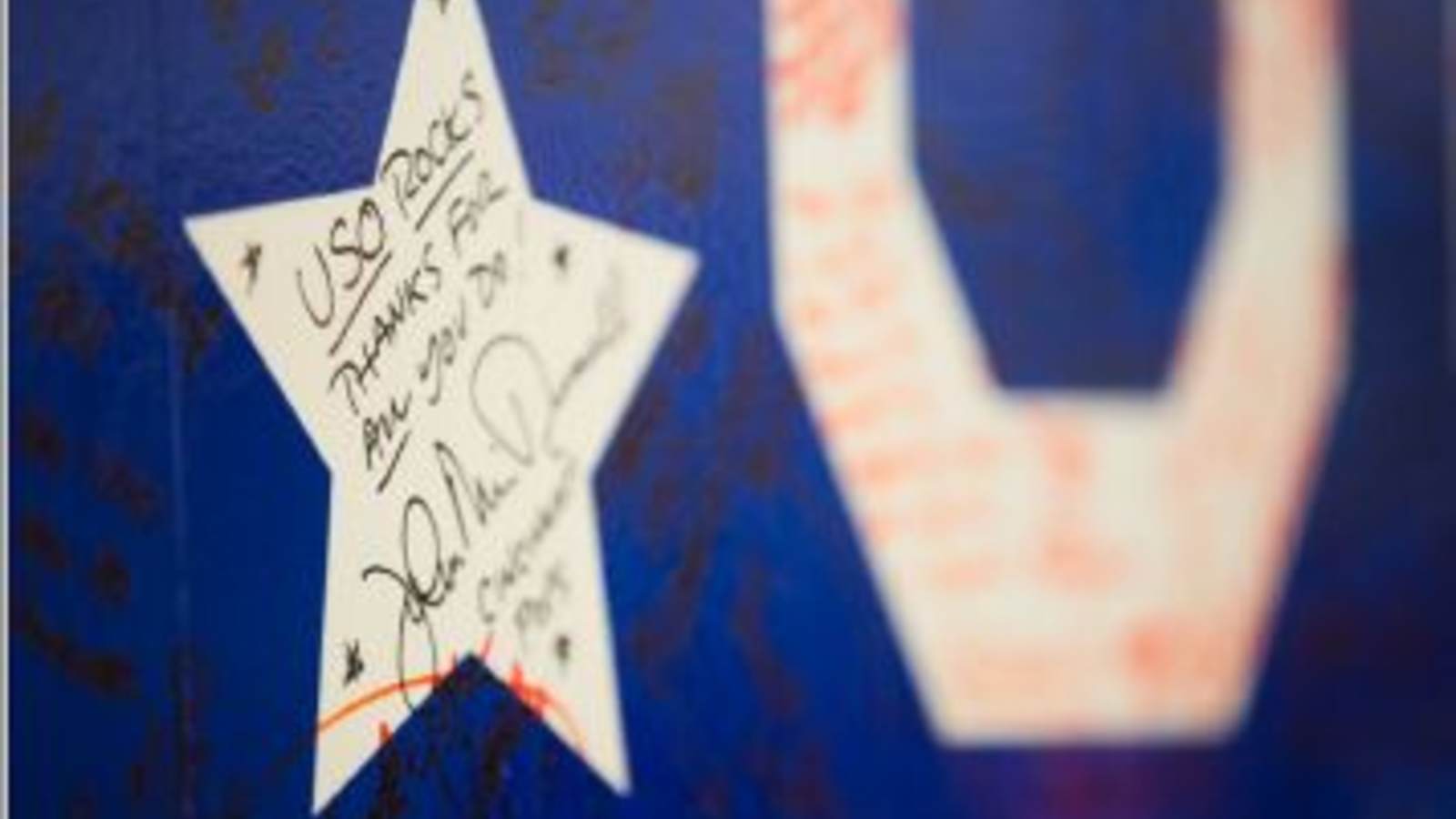 Visitors to the USO lounge at CVG enjoy leaving notes on the wall.

Packing up bags and boarding a flight to a new city can be a great adventure. But for the men and women of the armed services, flying often brings with it a mix of stress, emotions, fatigue and anticipation. For active service members, flights can be the beginning of a new tour of duty, leaving behind family and friends to defend our nation. Or it’s the close of a tour, marking the end of months or years of hard work and sacrifice. Regardless of the reason behind the journey, traveling from city to city can be a more complicated situation for active and retired members of the military.

That’s where the United Service Organization (USO) of Central and Southern Ohio steps in. The USO, which is a national service organization dedicated to active-duty military, guard, reserve, and their families through programs and services, operates USO Lounges at airports around the world. In Cincinnati, the USO has two lounges: one in Concourse A and another in Concourse B. Lounges are available for traveling active-duty military, retired military, and their families. Access to the lounge is free for service members and their families, and each lounge is designed to offer a respite from the chaos of traveling as well as a space to get free food and drinks.

“Our lounges are designed to be a comfortable place to be,” said Kathy Williams, a volunteer for the USO and manager of the lounges at CVG airport. “Our biggest focus is to give our military service members a place that feels like home, where they don’t have to worry about paying for food or sitting for hours in uncomfortable places. They can come here, rest and relax.”

Kathy understands service members’ need for an oasis while traveling. Both of her sons are members of the military—one is retired, the other is serving 4 years active-duty and served in the KY National Guard & Air Force Reserves —and she has seen the impact that being a part of the service can have on a family. After observing how little support was available for her son’s family, including her grandchildren, Kathy and her husband decided to get involved and help where they could.

“We make sure that the lounges are stocked properly with food, candy, snacks, drinks and sandwiches,” Kathy said. “We also have several recliners and rockers available for men and women to come and sit and fall asleep if they need to. We want to give these men and women who are coming from huge experiences—or on their way to one—a place to rest.”

Kathy and her husband also ensure that each lounge has volunteers to keep it open and running every day from 8am to 8pm. Last year, the USO’s lounges at CVG serviced more than 27,000 active-duty service members, retirees and family members. Since the lounges opened in 2012, the number of men and women who use them has increased each year. Volunteers power the entire operation, as do donations from Delta, the airport, and organizations and individuals across the city.

Since 1941, the USO lifts the spirits of America’s troops and their families. A nonprofit, congressionally chartered, private organization, the USO relies on the generosity of individuals, organizations and corporations to support its activities. The USO is not part of the U.S. government, but is recognized by the Department of Defense, Congress and President of the United States, who serves as Honorary Chairman of the USO.

Peggy Littrell has been volunteering for the USO for years. She grew up as a Navy brat, and her husband and son served in the Army. Volunteering was, for Peggy, a way to give back to the men and women who are volunteering to serve.

“I know how it feels to be in their shoes,” said Peggy, who moved across the world with her family when she was young. “I think it’s been more of a blessing for me. It’s so rewarding to be able to provide food and rest to these men and women and their families.”

Peggy is one of many volunteers who go to the airport to serve the USO through four-hour shifts. Peggy volunteers for as many shifts as she can, and she’s often at the airport several times a week.

“The impact of these services can’t be measured except through the smiles and ‘Thank Yous’ that we get,” said Paul, who was a green beret in the Army. “The lounge is a safe harbor. It’s a place where these men and women can check their problems and concerns at the door.”

Like Peggy, Paul and BJ Dusing feel that they are getting more back from their volunteer time than they ever imagined. In fact, during Paul’s very first volunteer shift, he struck up conversation with a Retiree, who knew some of the men that Paul had served with in the Army. Paul was subsequently able to reconnect with a colleague for whom Paul had been searching for years.

“I had been looking for him for decades,” Paul said. “And then, on my very first shift, I was able to have a conversation with a man who could connect us. Those kinds of experiences amaze me. I’ve been grateful for that reconnection ever since.”

Finding and forming connections is a natural outcome of supporting the USO lounges. Kathy and the volunteers often spend their shifts listening to guests share stories of their experiences, or spending time with active-duty military who are decompressing from their latest tour.

But, sometimes, volunteers simply keep watch over men and women who need to rest.

“We understand that not everyone wants to talk,” Kathy said. “There are a lot of things that the civilian population doesn’t understand about the solider experience. A lot of times, soldiers don’t want to talk about what they’ve gone through. They want to be quiet.”

Kathy recalled one weary soldier who was returning home from active-duty who found sitting in the connected rows of chairs in the main waiting areas of the airport to be stressful. As people would sit down and stand up from the rows, all of the chairs moved in unison, causing her active-duty reflexes to go into hyper-drive. It was nearly impossible to rest and relax—until she found the recliners in the USO lounge.

“Every movement for her was jarring,” Kathy said. “It was like a trigger for her. When she found our recliners, she instantly fell asleep. It was exactly what she needed while she was on her way home.”

The home-like atmosphere would not be possible without partnership from the CVG airport and Delta. Each donates the physical lounge space for the USO to use, and Delta Cabin Services provides drinks. Kathy runs to Sam’s Club and Kroger stores to purchase food and snacks with money contributed via donations in the lounges as well as donations made through the USO in general.

“The airport has been a great partner for us,” Kathy said. “They are so supportive of our mission and help us to keep things open and running.“